A Reddit administrator and power user announced this week that pictures of guns at Reddit with the Reddit alien logo would no longer be permitted. According to a screen shot at Imgur, the admin explained that “we are discontinuing any permission to use the Reddit alien logo, or any other trademarks, on any guns” and demanding censorship “of the gun with the Snoo engraved.” To justify this new ban, the administrator said the ban was a “one time thing” instituted in year 2011. 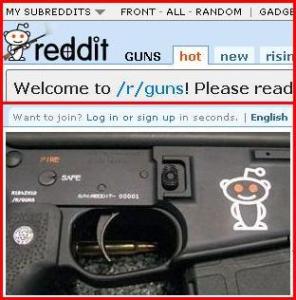 Our investigators took a look at the calendar on the wall and found that the current year was actually 2015, not 2011. We reached out to our expert, Ivan Pavlov, who explained, “Sometimes a person forgets to remove old calendars from the wall so he gets stuck in that year. Then, the person loses all track of time and begins to think current events took place in the past. In psychology, we have a term for this phenomenon: Reddit Creep.” Asked to respond to charges of censorship, unnamed sources at Reddit told us, “But no. We at Reddit would never censor our users. We respect our user base. Removing things the users like is not censorship; it is love.” 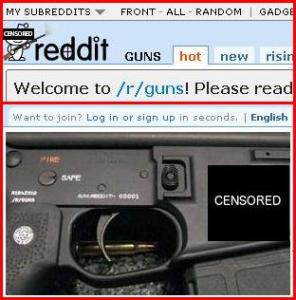 Community member and user /u/Blix- responded by starting a discussion entitled
“Why is the reddit logo on the gun censored?” The user protested with the statement, “This picture is a part of Reddit history.” The new protest post received about 92 percent support from the community, with over 700 points, but nobody is really sure due to the Reddit policy of fuzzing. Apparently, some eight percent of users opposed it and Reddit is a democracy. The eight percent wins. Fair is fair.

Among the comments, users were polite and respectful. They had to be because — a few months ago, another new Reddit policy from 2011 was announced. Harrassment and racism were banned and certain sub-communities were eliminated. The new clean Reddit surely no longer has any comments that are anti-gay, cursing, gratuitous insults, combined cursing and gratuitous insults, or religious bigotry. Reddit is now a nice clean safe space and the new pre-existing gun logo ban will clean it up even further. As one user proclaimed, “it’s a lot harder to defend wanting to be mean to people (including going to other subs and harassing people there) than wanting to look at pictures of guns.” At the Reddit Lounge, power users were toasting with strong shots of bleach.

The user who announced the gun ban from the r/Guns community went by screen name /u/krispykrackers. Now some are complaining that this screen name itself is racist harrassment, anti-religious, and quite a trigger. Word “krispy” has been used to describe Jews burned in the Holocaust, whereas word “krackers” is commonly used as an insult to White Americans. Worse yet, some are noting the use of K’s instead of C’s, as possible code for the notorious Ku Klux Klan. Administrator u/Sporkicide sees it differently. People who are complaining about the KK guy were the mean ones by “filling Krispy’s inbox up with hate.”

In an utterly outrageous fully-triggering unAmerican and virgin-ending tirade of an unbelievable adjective-laden excruciating and disgusting act of horrific right-wing leftist and anarchist disobedience to the superbly pious righteousness of the meritorious and unquestionably impeccable decision of the great, hard-working Reddit administrators, moderators of community /r/Guns replaced the iconized picture of the gun with the same picture — but now with the Reddit icon blocked by a black box and the word “censored.”

In a stunning display of untidy independence, one user suggested replacing the Reddit logo with the Voat logo. Voat.co is a similar community known for its “free speech” rules and a popular alternative to safe-space Reddit. Another user replied with great eloquence and clarity, “Eww no, f@$& voat.” That answered that and the “censored” box was the chosen new design.

The original admin post banning the Reddit logo on guns also worried that there would be “confusion within the community and off site that we currently sell these.” To make sure that nobody would ever consider this idea that guns are sold at Reddit.com, our investigators visited the Reddit sub-community entitled “Guns For Sale.” As per a message left on our answering machine a few hours ago, Noam Chomsky whispered, “Well as we would all know if we studied the language carefully, the name ‘Guns for Sale’ generally refers to places where no gun sales are taking place.” Nancy Reagan’s in-house psychic is now predicting that the 2011 rule change at Reddit will be expanded retroactively to cleanse the site of sub-community r/GunsForSale.

The r/GunsForSale community now has a photo of a gun with the Reddit rival Voat community mascot, a goat. Upstanding gun owners and gun rights supporters are now rushing to Reddit to support Voat. At the actual Voat, a former Reddit user remembered that Reddit has previously given permission for its logo to be used on gun photos, sometime after the 2011 rule changes and before the 2015 “clarifications.” A link to an original article at Mother Jones was provided.