BREAKING: Newscast Now just learned that George Hotz has been involved in a terrible one car incident that wrecked his self-driving car and landed him in the hospital. We have also learned not to trust “breaking” stories on the internet. George Hotz is known as the genius who hacked the iPhone in a process that has become known as “jail breaking.” His self-driving car prototype was an act of war against Google, where much hype surrounds the concept. Recently, according to a reporter at Bloomberg who visited Hotz before the tragic accident:

The claim seems absurd. But when I turn up that morning, in his garage there’s a white 2016 Acura ILX outfitted with a laser-based radar (lidar) system on the roof and a camera mounted near the rearview mirror. A tangle of electronics is attached to a wooden board … He’s been keeping the project to himself and is dying to show it off.

Prophetic words indeed. The sad genius who gained fame by hacking the iPhone now sits in traction, relying for his very life upon state-of-the-art medical internet technology provided in real time over the internet by rival Google. Concerns that Google may interfere in the healing process for business reasons were left unanswered at publication time.

A few hours ago, Hotz became lucid for a short time. Standing by his side was previously undisclosed girlfriend Courtney Love. She told a local anchor that Hotz was in high spirits. “Mommy,” he said, “Google did it with their wi-fi.” This resulted in an argument over the proper pronunciation of the word ‘wi-fi.’ Holz then fell back asleep. Reporters are standing by. (Original video removed)

Local police have indicated that this appears to be a classic example of self-driving car hackery, which has been an all-too-common form of tech crime since this incident occurred yesterday. Citing a need for privacy, the police refused to say that a claim at Twitter by Isisonymous taking credit for the hacking incident was involved in the investigation. As loyal advocates of quality reporting, we are not reporting the Twitter claim here. 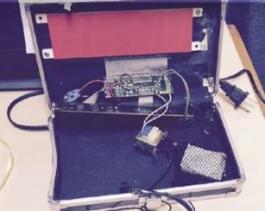 The FBI has also become involved in the case. They have named a person of interest — one George Hotz who made a device that looked much like a terrorist bomb threat, pictured. The Defense Department is looking into a possible relationship with terror cells in Libya. If found, Secretary of State John Kerry will be all over the TV telling fearful Americans that we need to bomb the home residence of Bashar al-Assad in Syria. That same official leaked the following portion of the speech:

Today, we join with George W. Bush and everyone connected to defense companies to begin bombing everywhere that the dictator of Syria may be so that we can prevent further terror attacks on United States soil by educated high-tech hacking terrorists in Afghan caves. We follow the precedent of long-standing policy to go after whoever we want to regardless of who actually did what. 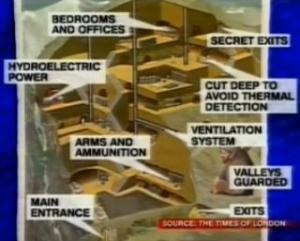 Gallop told us they have prepared the post-speech polling data for the speech, and a new bombing campaign is overwhelmingly supported by the people.

Interpol has intercepted intelligence from Russia. Strong man Vladimir Putin can be heard laughing on the audio file. Chris Christie said at a campaign rally, referring to the incident, “We must shoot down every Russian plane in the world, and we don’t expect anyone to complain. Should Russia decide to shoot back, we will declare that a war and [pause] and [pause] launch our strategic weapons upon the city of Moscow.”

The Carter Center posted a message. “We are happy to announce that Jimmy Carter is now cancer free, that the Venezuelan elections were fair, and that the former president strongly feels that this terror attack came out of Venezuela.”

Fortunately, according to the hospital, Hotz is expected to live. Unfortunately, he is expected to be released to the FBI because his self-driving device looks too much like a terrorist bomb. Sources tell us that the FBI is treating this as an extremely high-risk situation as Hotz has a long history of jail breaking.