Staples, once the country’s largest office supply chain, gears up for bankruptcy.

Staples, Inc. once offered everything anyone needed in the way of office supplies. The giant retailer has now dwindled down with days numbered to …nothing.

The decline has been cautiously steady since 2009. But customer visits to Staples fell 64*% greater in recent months according to RetailMetrix, a data collection agency of retail stores. “The box store can’t even sell boxes anymore” read a statement released on Friday.

“We were the tops in retail,” said a former CEO. “Today we are so full of our shelves.” During the early 1990’s, Staples followed the trend to “scale up” and compete with other retailers such as; Abraham and Straus, Woolworth’s, A&P and Radio Shack. “They threatened to take our customers away but we managed to surpass if not equal them today.”

In the late 90’s, Staples “scaled up” even more by taking away shelf space and limiting stock to exactly what they analized customers should purchase. 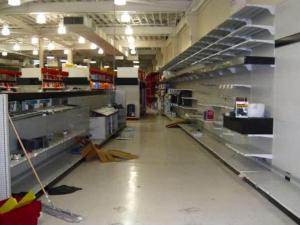 Gail Sonersiem loved the new format. “I LOVE shopping here! The aisles are so wide and uncluttered. When I came in recently to buy a pencil sharpener, Staples made it EASY to select one by limiting my choice to 2!”

“I’ll miss shopping here!” says Matilda Grenavich, another Staples fan. “You can shop all day and never be bothered by anyone — not even the employees!”

Staples also followed the trend of giants like Gimbels, by reducing store help. “It was a good choice for Staples to eliminate the security people,” said a corporate executive. “They stunted merchandise turnover and didn’t generate sales.” The decision led to Staples having the largest “shrink” in retailing history. (Shrink is retailing’s lingo for “theft”.) “It’s all in keeping with our ‘strategy’ of being number one all the way around.”

We spoke with other company executives about the current operations of Staples under the direction of CEO, Ron Sargent. Their collective and conclusive statements pointed out, “The company has been moving successfully in a steady direction of decline since his administration.”

“It’s not his fault;” said a protective minimum wage worker. “I overheard a big shot say that he [Sargent] was blind as a bat and dumb as an ox. With all those disabilities how can he know what’s going on? Then they said something about bailing or getting fired. I need my job and the baler machine was broke way before I started last month. I have to work and break down and stack all the boxes by hand.”

NewscastNow.com was able to find an insider at the corporate office who would answer our question about how reducing the employees and eliminating security affected shoplifting. “Susan” explained to us that it hurt Staples because theft soared and company asses fell.”We threw 11 million dollars into a study to find a way to reduce all the theft and came up with a solution that seemed to solve the problem.”

NewscastNow.com learned that the solution was to reduce and limit stock. “You used to come into Staples and find a choice of a hundred pens and purchased the exact one pen you needed. Now we group pens in bags of 100. It’s not so easy to steal a lifetime supply of pens! We also limited what we carry. We used to sell EVERY type of pen. Now you choose between 4 types: black, white, green and red. It keeps it simple and that’s in keeping with our ‘IT’S EASY!’ slogan.”

Rapid Retail, the company that evaluated the Staples theft problem stated, “They used to carry so many single items. It didn’t pay. It wasn’t profitable. Think of all the man hours needed to stock all that junk. Now when a customer walks into Staples they can buy bulk. People need 100 of the same pens. Now shoppers can be confident because their choices have been narrowed down before they even enter the store! They also know they won’t be confronted by an uneducated employee or a shoplifter lurking in the aisles. It’s not always about developing customer satisfaction. The customer will buy anything. It’s about limiting inventory to reduce theft and employee costs. Besides what thief in their right mind would want any of the crap Staples sells?”

A company spokesperson announced on Friday, “The ‘sudden’ drop in Staples sales is a result of the recent turn of the economy. When people can’t buy houses they can’t buy furniture. Without furniture no one has a junk drawer. Without a junk drawer, what good are Staple products? We have scrambled to analyze the situation and concluded that we must close our stores if we want to compete. The latest trend is to sell on Ebay. People can save money because we will be able to sell single quantities of items again.”

(NewscastNow.com’s delegated fact-finding staff James Corwin promulgated the illusion of Staples’ analyzations. They found: the bag of 25 ink pens purchased at the retail store sells for $17.98. (78 cents per pen). On line Staples can offer a single pen for $2.95 plus $3.95 shipping. The total purchase savings are $11.08.)

Recently, Staples took yet another new direction in their concept of retailing. “We decided to build rooms in our stores and rent them out to people who need a business address.” When asked if this seemed plausible since there are hundreds of vacant business complexes throughout the country, their reply was: “IT’S EASY! Those people would jump at the chance to attach their name to Staples, Inc. It shows prestige! It’s like having space in the World Trade Center in the months before 2001! Just think how many pens we can sell to someone who is waiting all day for a customer to come in. Do you know how boring retail is?”

Staples did not specify if these “offices” will be actual rooms or cubicles peppered throughout the aisles similar to kiosks in shopping malls. (CEO Ron Sargent could not be reached for comment.)

Office Maxx (not affiliated with Staples competitor; Office Max with one “x”) Is another new and international leading firm that analizes productivity and design in office space. Staples, Inc. hired Office Max to review the latest concept. The review cost Staples $23 million. “The idea is so unique. We will be the first creditors standing in line of Staples!” said David Sargent CEO of Office Maxx. “Besides; when it doesn’t work they will claim bankruptcy, blame the economy, liquidate Staples, and convert the business to an office park. It’s called diversifying. Sears and K-mart have been accomplishing this for years.

The new business offices will open in three Staples locations throughout Massachusetts, the business capital of the world. “Our goal here is to continually focus,” said Peter Scala, Staples head of merchandising. “Merchandizing heads must roll…”

Paco Underhill, founder of Envirosell, yet another self proclaimed “international” retail consultant who is jumping on the bandwagon to attract free publicity, stated the rhetorically obvious: “Most big box retailers grow bigger and get more business,” The same could be said about the business of Viagra.