Everyone knows who Martha Stewart was but not many people remember the originator of the home making industry, Susan Millicent Homemaker. For a short time, “Suzy Homemaker” was an icon. 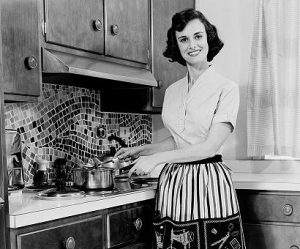 Suzy became so popular that the word “housewife” was replaced by “Homemaker.”

They even named a town after her (Homemaker Place, Bakersfield, California).

“It was a small town,” remembers Suzy. “We lived in a wooden house right in the middle of nowhere. The train only stopped when someone had to pee. We got our news from papers left behind in the outhouse.”

Suzy’s father worked for the town as a road manager. “He used to drive a horse drawn cart that sprinkled water on the road to keep the dirt from flying all over,” recalls Suzy. 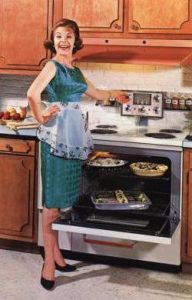 Her mother was a devote Christian, Suffragette and supporter of women’s activist, Harriet Beecher Stowe.

“My mother expected me to follow her beliefs but I rebelled. I believe a woman’s place is in her home washing and cleaning and stoking and milking. She and her cronies were campaigning to break chains all while they restricted themselves in the latest fashions.”

When her father Bernard and her brother died during the war, Suzy had to take a job to support her mother. “She was gallivanting all over picketing anything that looked like a man. She hated men.”

Suzy had to move away to find work.

“I miss home. After my mother died there was no one left. The town became a ghost town,” Suzy recounted. “Even the train station was torn down.”

(San Tanpigo was later absorbed by neighboring towns. Today a derelict factory stands where the Homemaker house once stood.)

Suzy first began working at the age of 14. “I worked in a mill. We made all sorts of things so I learned all about sewing. We made $1.25 per day.” Suzy never missed a day of work.

After a fire destroyed the mill, Suzy had to find another job. She was just 17. 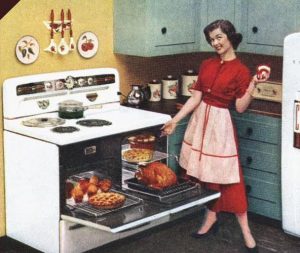 “I actually went to Hollywood like all the young girls with daydreams of becoming a star,” Suzy landed a cameo in the Warner Brothers picture “The Amazing Dr. Clitterhouse.” She was shipped to the United Kingdom for another picture; “Bank Holiday.” “Neither film were any good,” Suzy admitted, “And I realized this was not the career for me. I never made any money so I couldn’t afford the fare back to the United States.”

Suzy stayed in the United Kingdom and landed a job at the world famous Savoy Hotel. “I started as a hat-check girl and that’s as far as my career ever went,” laughed Suzy as she thought of those days. “One day an American came in and asked me if I wanted a job. The job was in a new medium called television. I didn’t have to think twice. I knew television wouldn’t work but at least I would be able to get back to the states and look for a husband.”

Suzy was right. Television didn’t materialize. It was interrupted by World War II.

“I became a WAC,” Suzy giggled, “What else could I do? Those jobs were available.”

During the war Suzy learned how to care for injured men. “The whole ordeal made me stop and think about becoming a nurse. But then I thought against it. I was very good at it but spending the rest of my life cleaning bedpans wasn’t for me. I still wanted to be a wife.”

When the war ended television came calling again. “I got a wire from George Tibbles. He wanted me for an experiment he was contemplating. He called it a ‘situation comedy’.”

At that time television was just creating itself. Everything was live and unscripted. “George had an idea for a scripted regular show that would be taped and preserved. He called it: ‘Life with Eloise’ but the show never got off the ground.”

“He was finally able to make the series. It was about a Dumb Dora type that got mixed up with crazy ordeals. I didn’t think it was good so I turned it down.” (The show was eventually produced as “Life With Elizabeth” starring Betty White.)

“I didn’t understand what all the fuss about television was but I watched anyway,” explained Suzy. “I watched shows like Arlene Francis’ ‘Home’ and thought I could do something like that.”

Suzy continued freelancing between modeling, live demonstrations of various products and recording radio commercials. “I did a few commercials on live television. I would caress a refrigerator and smile with glee. It didn’t seem like it could amount to anything but I was wrong. Many people made careers out of doing just that. Look at Barbara Walters. But I was always nervous when I broadcast to millions of people live.”

Suzy recants a moment of being fired. “I think it was for Land-O-Lakes butter. They zoomed in for a close-up of my hands spreading the butter. I was so nervous I shook and the bread fell apart. It was live!” Suzy laughed.

Suzy’s big break happened at the 1964 NY World’s Fair. She was hired by Westinghouse to demonstrate appliances. “There were many important people visiting that fair but I was too busy demonstrating dishwashers.”

The only star Suzy met was Steve Allen, originator of the Tonight Show. As the king and founder of late-night talk shows, Steve Allen had the respect and admiration of all talk show hosts. “He asked me if I would do him a favor and appear on a show. I didn’t know what he meant because all I did was demonstrate appliances.”

Steve Allen was notorious for recognizing talent. He often presented guests just to witness how they would act and how the audience responded.

“I thought he was crazy when he told me to just bring a recipe and talk about it!”

Suzy had to discuss the matter with Westinghouse which held her contract. “Westinghouse thought it was a great idea. They had other motives. They allowed me to do the spot as long as I would cook my recipe on a Westinghouse stove. It was bizarre!” laughed Suzy, “Here I was demonstrating appliances and now I was going to cook something on television….I didn’t even have a recipe!”

The details were worked out and Steve Allen’s connections landed Suzy Homemaker on NBC’s Today show. From there it became history.

Steve Allen noted why he enjoyed putting new faces on the “tube”: “You never know what could happen. And in this case [Suzy] She was well received.”

“The first thing I attempted was to simply bake cookies,” recalls Suzy. “They were chocolate chip cookies and I put all the ingredients together and started to mix the dough before they cut to a commercial. During the commercial, we switched the mix for dough that was previously mixed and set to rise a little — the magic of television. When we came back, I was putting the cookies into the oven and I dropped them! They didn’t just fall, they flew! But the camera didn’t pick up any of this. Only the noise was heard so I slammed the oven door a few times to confuse people. I thought for sure my demonstration failed or at least angered the people at Westinghouse.”

But all Suzy’s fears were in vain. The people of Westinghouse rejoiced that her slamming of the door proved how durable the product was and gave sales a giant boost!

Suzy’s demonstration was met with great acclaim. People from all over the country wrote in demanding more Suzy!

“After the fair, Westinghouse approached me to be a spokesperson for their product on television. I didn’t think I would enjoy doing it. All I wanted was to be a married housewife.”

“I can’t explain it. It was as if something took over my life. I never had time for anything else! Suzy Homemaker products started to pop up all around me. As I understand, Westinghouse sold their rights to my name to a small toy company [Topper] and everyone was making money but me!”

But as fads come and go and are eventually laughed and scorned at, so was the story of Suzy Homemaker products.

“I’m not really sure what happened. I never knew products were being manufactured under my name until about eight months after. There was a clause in my contract with Westinghouse that allowed them the use of my name. I had no recourse. I made no money from it.”

As the 1970’s approached, it brought the woman’s rights movement. Girly things such as dolls and toy baking ovens “interfered” with the movement and were systematically targeted as “repressive.” Suzy’s name became a feminist insult directed at domestic women. Women who enjoyed living according to society’s expectations without question were tagged with the derogatory term “Suzy Homemaker.”

‘I’m still confused,” says Suzy. “They stole my name and gave me their identity. People don’t understand. I only had a career because I was thrown into it. I never wanted to be an icon of any movement. No one has the right to demand I be anything but me. I was never for or against woman’s lib. There’s room in this world for everyone to be what they want.”

“I finally got what I wanted, though,” reports Suzy. “I always wanted to be married and a good housewife. I got to be both.”

Suzy married and had three children. She does not want to reveal her married name because she wants to remain removed from her tumultuous past. “I found my closure and am enjoying my tranquil life.” She says. “I didn’t like what happened then and I don’t want to live it again.”

Suzy has written an autobiography but has no plans to publish it. “My husband passed on a few years back and my children are all grown and away. I did it to fill time and find understanding. I will leave it to my children who know nothing about those years. They can decide what to do with it.”

Pictures from the Suzy Homemaker collection.