President Barrack Obama has irresponsibly taken his life into his hands and risked the security of the United States by entering the zone of danger at the Flint Water Crisis in Michigan. Obama failed to take advice and wear the proper gear. Barrack Obama is tentatively scheduled to remain in the White House for a few more critical lame duck months where so many terrible things could happen. But, rather than stay healthy and prepared for the American people, he gallivanted into Flint to drink the most toxic water scientists have ever seen. 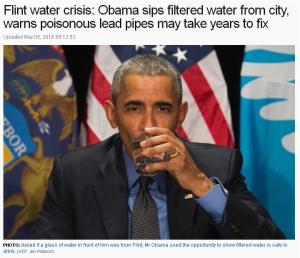 While reports like this one pictured fill the internet, few dare to look at the dark side of this publicity stunt. Most of the stories are more filtered than the water itself.

In the next few months, so many terrible things could happen. Many are more scared then ever, huddled together in closets at the thought of these dangers. Most notably, an ISIS cell could dump toxic chemicals into a reservoir, perhaps even enough to be measurable at the source of contamination.

There is also the chance that a Supreme Court vacancy may open, and Obama may not have the cognizance to nominate a successor. “Then where would we be?” asked Ted Cruz in a speech where he opposed any Obama court appointments.

Rather than being presidential and prepared for these potential crises, Obama risked his decision-making abilities for nothing more than a photo-op to protect Michigan Governor Rick Snyder. Everyone we could find agreed. Bill O’Reilly yelled to us, “Obama never had any decision making abilities, so shut up.” Chuck Grassley suggested, “Obama is a lame-duck anyway, so he should drink up.” 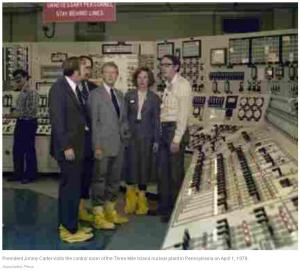 When the Three Mile Island plant suffered a “malfunction” and “leak” in 1979, then-President Jimmy Carter entered the facilities to calm the public. Jimmy Carter wore proper gear. He did not risk the entire nation for his photo-op. Jimmy Carter later developed cancer.

The scientists at Mises.org had warned Barrack Obama to wear the required yellow pajama booties that would make him safe, just as they had kept Jimmy Carter safe then. But Obama audaciously and hopelessly refused.

The terror warning level would be raised to red, but Obama is too dumbed-down by the lead to even do that. It is going to be a scary time between now and January 20.

UPDATE: Low levels of lead in drinking water has determined to be perfectly safe, or more study is needed, according to business experts at Americans For Prosperity.