Consumer Alert: It was a really big explosion. This household product is probably in your home too.

Funeral arrangements are yet to be made for a young mother of eight children, only 31 years of age, who lost her battle yesterday after a long struggle. Reverend Jesse Jackson was at her side to make her last moments as comfortable as possible until the very end, except when he was talking to the media all day long.

Natasha Harris, a young mother of eight, died from ingesting Coca-Cola. She developed cardiac arrhythmia and eventually lost her battle as a result of consuming the soft drink.

She is being mourned by her faithful husband Chris, whose sadness is fired by outrage over the fact that such an incredibly dangerous thing can be sold at the local store and, worse yet, in a supermarket where people buy food. Chris commented that Coca Cola is “unhealthy” and can become an addiction like other drugs.

Coca-Cola has been proven to dissolve metals and even explode when combined with other foods, but it remains on the market as the controversy continues. On one side, consumer and health advocates constantly cry about how dangerous everything is and how we need to be protected from ourselves in every way. On the other side, inaction is fueled by the sugar high and the caffeine in the soft drink itself. Users of this drug can’t stop yelling “freedom, freedom” long enough to hear any claims of danger against it.

“Think how it can destroy the intestines of poor unsuspecting children,” said Jimmy DeVille. However, Martin Smith countered, “You can slip on the throw rug in the bathroom too, but we can’t have the nanny state watching us pee.”

David Crerar, the coroner, stated, “If not for the consumption of … Coke … it is unlikely she would have died when she died [at age 31] and how.”

“Terrible;” said Mona Carson. “To die so young and unexpectedly …leaving all those children without a mom.” Harris probably had no idea that drinking Coca Cola would lead to her death, some claim. 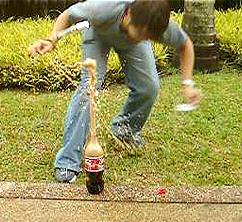 Some knew. Here, a 36-year veteran chemist tries a dangerous experiment to demonstrate just how explosive this consumer issue is, hoping to save some children. The scientist warns, “Run away, as fast as you can.” Bambi agrees. Do not try this at home. Many have wondered what the company knew and when it knew it. This matter is now being dubbed as “Colagate” after a hotel.

It is not yet known if any legal action will be brought against the enormous Coca-Cola Company. Harris leaves behind eight children who will now have to spend their lives without a mother.