Johnson and Johnson’s (A family company) was found guilty of “spiking” their products with toxins. “They were fully aware of it and that people would die” was the summary of the decision handed down from the Supreme Court.

The conspiracy extended throughout and beyond the medical world.

Doctors refused to accept that Johnson and Johnson crept into Jessica Fox’s vagina and gave her cancer. It was her poodle, Dexter, that finally got in and figured it out. “It felt good.” noted Ms. Fox, who proceeded to sue the company for millions and millions and millions of dollars. 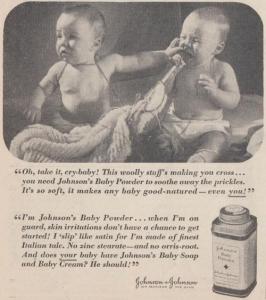 She won and died before she could celebrate by taking everyone to Disney World.

“What a shame,” said a neighbor. “All that money and nowhere to go.”

Ms. Fox’s death was worth $70 million dollars more than a 20 year old killed in action defending the United States of America.

The neighbor was not the only one distraught. “This has gone too far,” said Linda Reilly, a company spokesperson. “These accusations are from the f***ing lawyers. They target big companies like Johnson and Johnson because they have oodles of assets.”

As the population explodes more and more people must invent jobs to survive. Lawyers are no exception. In the last 30 years frivolous scare tactics have generated trillions of dollars for lawyers and kept the economy revolving in America.

A company CEO released this statement: “The company is very big which makes it an easy target for deep pocket syndrome…Women falsely accuse men of rape to reap financial rewards… Now with the help of lawyers they can claim that the big Johnsons are also sticking it to them… and make millions!”

We asked Robert Catrone of Texas what he made of the court’s decision. “Women putting products in their vaginas and getting paid for it is not new. It’s been legal in Texas for like ever.”

An anonymous insider explained confidentially to NewscastNow.com; “This is terrible. With judgments like these it could put Johnson and Johnson out of business. Look what it did to McDonald’s when the lady spilled hot coffee on HER vagina! What is a vagina really worth?”

NewscastNow.com went out on a limb to check facts with leading insurance companies to find the value of the loss of various limbs. We found that the loss of an standard arm is worth $100,000. A leg, $40,000; a penis; $25. The loss of a vagina brings $55 million dollars. (The difference of $20,000,000 won in this judgment was for pain and suffering – a fee that should be dispersed directly to the readers of this article.)

“Now the Surgeon General is contemplating a warning label!” disclosed an anonymous company employee. “The debate questions the obligations of these woman to disclose to their partners that they have a toxic vagina. They need a warning label! They are constantly thinking about the location and sticking it.”

The court also ordered Johnson and Johnson to set up a “slush fund” for forthcoming vagina claims. The legal department stated, “To claim your vagina we suggest you visit a lawyer who can fill out the necessary standard forms.” (They charge up to and not less than 80% of your claim.)

MBW (Men Behind Woman) a not-for-profit environmentalist group of athletic supporters for woman commented, “We live in a world of constant destruction. We are destroying the air, the drinking water and the ghettos. It saddens us to know that big chemical companies are now destroying our places of comfort and solace, too. We need to fight for woman up-front or we will all be guilty of using the back door.”

“It’s about time someone did something about the use of baby powder down there,” said William Turkin of Ohio. “Do woman know how terrible it tastes?”

It is not known how many men suffer from oral cancer derived from baby powder.